Pop out in new window

This is the letter Q

Request For Comments about…

What is your favorite form…

Previous
Start slideshow Next
3 of 14

………combined in one section. 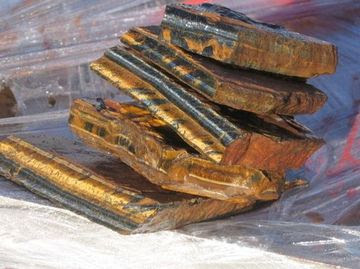 One of the most incredible looking rough stone to be held!.
Horizontal layers and bands of vertical colours!.
I have several large slabs - unpolished and rough - even in this natural state this stone is still amazing - the deep rich Blue of the Hawk's Eye, and the blazing Golden glow of the Tiger's Eye…watch you from every angle.
The effect can be likened to the sheen off a spool of silk, it's luminous streak of reflected light is always perpendicular to the direction of the fibers. A change in the angle of light results in a reversal of the conditions, the dark bands becoming lustrous and the lustrous bands becoming dark.
This combined influence - the Hawk's Eye famed for its chatoyancy, reminiscent of the 'Eye of a Hawk' is closely related to Tiger's Eye in that it is from the Hawk that the Tiger is born.

Hawk's Eye and Tiger Eye complement each other and combined, work well in Charms and Crystal Magicke.

The Hawk's Eye sees what lays far below…the Sun rising in the arch of Blue sky glides in waves of power to deflect and protect…helps the Practitioner visualize Spiritual and material goals, and then welds the action of Jupiter.

The Tiger's Eye - becomes the Night action - Fire in the Dark - gliding through the undergrowth of change, disruption, challenges, etc - and like it's name, is a Hunter that targets. Tiger's Eye can then help turn the blueprints of the Spiritual imagination into practical plans that will allow One to manifest visions in the 'real' world.

Ancient Egyptians used Tiger’s Eye to transmit the power of the Sun God Ra so as to create material success - drawing Spiritual energies down to the inner layers of the Earth..and releasing it's treasures back.

This team effort of Birth and Re-birth provides the Shaman in undertaking Magickal journeys, astral travel or Spiritual challenges. They allow the Shaman to understand, and accept change and Death, in that it is not the end - just a phase to a new beginning, thus One learns to 'go with the flow' rather than fighting against the inevitable.

The two "Eye's" connect with Ancestor Spirits, and the 'Great Ones' (enlightened Spirits and/or Divine Forces who remain close to offer guidance and support to those who ask).

When the Blue Hawk's Eye bleeds into the Golden Tiger's Eye…there is another Eye created - one of Greenish-Golden hue known as Wolf’s Eye..
This is formed under the influence of Iron - and some liken the energy to that of Fenrir the Wolf..“He Who Dwells in the Marshes”.
Many seem to fear the Energy of this Wolf - I find him intriguing - there is something underlying to what is known - not just a sense of the raw, un-tamable power of Chaos….but the echo of Ancient deep Alchemy - the Forge, the Fire, the Cavern within.

When the Blue is almost like a rich Purple in hue, and the Gold is more a rustic brown colour then the bleed creates a Reddish hue that produces a glistening almost silky glow - this then becomes the Dragon's Eye of Survival. As a survival stone, it helps with the correct use of power for and in times of disaster, and turmoil, by teaching how to save and accurately distribute strength, energy and resources, that can then bring about the much needed vitality.

There have been no comments yet